Jeti-Oguz gorge (Kyrgyz: Жети-өгүз, seven bulls) — is one of Kyrgyzstan's stunning gorges, located at the southern shore of Issyk-Kul lake, about 17 km west of the administrative city Karakol. Its symbolic name originates from its seven cliffs along the mountain range at the entrance to the gorge, which has since increased due to natural erosion.

There is a high mountain river with the same name as gorge. Tourists may also visit one of the most beautiful waterfalls in the region - Devichy Kosy (Russian: Девичьи косы means "Girl's braids"), which can be reached quite fast by walk. One more interesting place that can be visited at this gorge is a cave about 80 meters deep. During the Soviet period there was built a sanatorium called "Jety-Oguz" where it is still possible to stay during the gorge visit.

Jety-Oguz gorge is located in the north-eastern part of Kyrgyzstan, 15 km. from the southern coast of Lake Issyk-Kul and is part of the mountain system of Terskey Ala-Too. The gorge takes place from north to south for about 30 km. The nearest big city from the gorge is the administrative center of the Issyk-Kul Karakol city, which is 15 km from Jeti-Oguz.

There are many different plants, berries, mushrooms and mountain flowers in the gorge. Fauna of the valley represented by different animals, such as squirrels, ground squirrels, mountain goats, out of predators there are wolves.

How to get to the gorge

The nearest city to the gorge is Karakol, from which you can reach the gorge in an hour to the direction to Balykchy town - Bishkek city along the southern coast of Issyk-Kul. The distance from Karakol to Jeti-Oguz is about 20-25 km. There are no regular international flights to Karakol unfortunately, therefore, you can get to the gorge from Bishkek city by car. It is about 450 km from Bishkek and takes approximately 5-6 hours of travel.

There are numerous tours to the Djety-Oguz gorge for tourists on the northern coast of Issik-Kul from Cholpon-Ata town. There are also a lot of companies that organize tours to Jety-Oguz and Karakol. 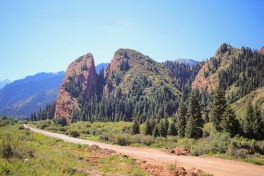 "Broken heart" cliff meets tourists at the beginning of the gorge.

Jeti-Oguz is well-know first of all because of its red-orange cliffs and the gorge was named in honour of it. For thousands years the river washed the rocks of the cliff forming its modern structure that can be seen today. There are few places with similar natural sightseeing in the country.

Also, the valley of the gorge attracts many tourists from different countries by its beauty, pure nature and fresh air. There are many places where you can spend a holiday, or stop and enjoy the view of mountains, firs, the mountain river, the waterfall and nature in general.

Tour along the gorge

The tour along the gorge is very diverse and there are many locations where you can visit and admire its nature of the local mountains. First of all, at the entrance to the gorge you can see the famous rock massif "Broken heart", which resembles a heart shape with a crack in the middle. The rock creates the first impression of this region.

There is a sanatorium on the way to the gorge where you can rent some room if needed. The further road is a dirt and the deeper you go along the gorge, the more difficult it becomes, so if you want to go deeper into the gorge, it's best to do it on an off-road car. About 1/3 of the gorge can be driven by a car, which is 10 km, but you can go on foot or on horses that can be provided by the local for a small fee.

There are two interesting places in the valley to visit: cave and waterfall "Devichye Kosy" (translated as "Girl's braid"). The cave is located relatively near the Jety-Oguz sanatorium, at one of the western slopes of the gorge, about 10-15 minutes along the road by. The cave is shallow - about 80-100 meters. The width is about 2.5 meters, and the height is about 2 meters. Inside of the cave is very damp, this is caused by the abundant internal currents of water, so it's worth considering your safety, since high humidity can contribute to the sudden collapse of internal rocks.

The waterfall is about 15 km from the entrance to the gorge, to get to it you need to drive 8 bridges, through a meandering river, and then further along through very stony road 2-3 km, which makes it difficult to travel by a car. When you arrive to the nearest point to the waterfall by car, than you should walk or take a horse to get to the waterfall, usually it takes about 1-1.5 hours. On the way to the waterfall you see a picturesque panorama of the whole gorge valley. The waterfall makes pleasant sensations from the freshness and beauty of the falling water.

There are also several small high-mountain lakes in the region of ​​the gorge, which are difficult to reach and take quite a long time.

Sanatorium Jety-Oguz was built in the days of the Soviet Union and was a prestigious place for activities and healing, but now the conditions of the sanatorium can be characterized as satisfactorily.

The resort is located at an altitude of 2000 meters above sea level, fresh mountain air, a variety of medicinal plants, herbs, sources of unique mineral waters attract everyone who cares about their health and appreciates an active, pleasant and healthy holiday. The sanatorium provides about 100 rooms for the accommodation of visitors. Here you can choose a standard room with everything you need for your stay. There are superior rooms with a high level of comfort and luxury apartments. Patients and vacationers settle for 2-3 people in each room, which is very convenient for guests coming as a family. Unfortunately, the Internet is weak, as well as other entertainment.

Jeti-Oguz gorge is one of the most beautiful and "must visit" locations in Kyrgyzstan. Mountains, forests, water, fresh air will bring you only positive impression. The disadvantages can be attributed to the fact that the sanatorium, some of its buildings, including medical facilities (e.g. swimming pool) have not been repaired for a long time.

Feel free to post your messages, edit, questions at discussion page of the article. And don't forget to share article with your friends in social networks.

Other articles about gorges in Kyrgyzstan